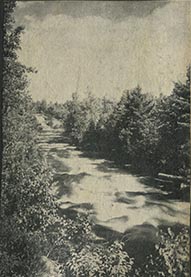 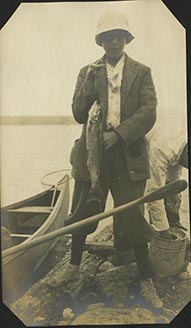 The History of Grand Lake Stream and Princeton 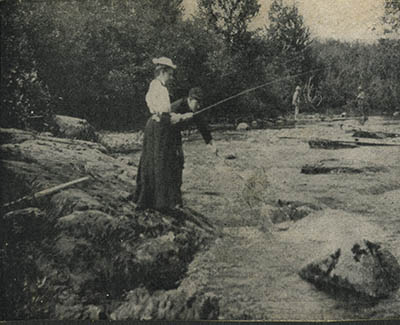 The Grand Lake Stream Area has a long history of catering to those desiring outdoor activities such as: fishing, hunting, canoeing, hiking, birding, wild life watching, photography, family re-unions and vacations. Although lumbering, the tanbark industry and mills at times have taken a major role in supporting the towns of Grand Lake Stream and Princeton, the hospitality offered by lodges, sporting camps, inns, and guides has been a mainstay since the 1800's. Area guides have a tradition of using/building Grand Laker Canoes(square stern) and cooking sumptuous meals on the shores of the lakes and is incomparable to any outdoor experience. Many celebrities have come to this area and return because of all that is offered here.

Grand Lake Stream first known as Township 3, Range 1, was contracted to Titus Goodman and Seth Wright in 1794. When Goodman did not pay his note, purchased by judge, Samuel Hinckley, in 1811 the township became known as Hinckley. One of the first settlers was David Cass in 1820 and the major business was lumbering.

In 1854 -55 William Gould built a landing almost at the outlet of Grand Lake Stream, which became the point of entry into Hinckley Township for sportsmen. By that time the area had become known for its salmon fishing. At times 50 tents were in the woods alongside the stream. Most of the guides were native Passamaquoddy from the Indian Township.

In 1870 the village within Hinckley Township was named Grand Lake Stream. Also the Township was purchased by the Shaw brothers to set up a tannery. The forests had hemlock trees (the bark is a crucial part of the tanning process). This became the largest tannery in the world. The workers then brought in their families and built homes in the village, some of which took in boarders.

However, In 1883 the Shaw brothers tannery faltered which was brought about by the failure of one of the largest boot manufacturers in Boston. The tannery managed to stay open until 1898 when it went bankrupt. With the demise of the tannery came the population decline from nearly 500 to 221 (1900 census)

In 1897 the Hinckley Township name was officially changed to Grand Lake Stream Plantation.

The demise of the tannery forced the local people to find other ways to make a living. Mrs. Lavonia Ripley's boarding house was the first one to make special provisions for sportsmen. Mrs. George Sym followed suit with her "White House". In 1893 Mr. W. G. Rose opened a sporting camp and called it Quananiche Lodge. This later became The Sportsmans Lodge operated by Pat and Steve Takach, but now is a private residence. Mr. Rose later purchased Mrs. Ripley's boarding house, which was across from his lodge and renamed it the Pioneer Inn.

In 1895 Stephen Yates purchased the White House and continued to take care of sportsmen. Due to the ill health of his wife he sold to Mr. and Mrs. Ball in 1901. They added cottages and became the first traditional Maine sporting camp in the region. This is now Weatherby's.

1898 was the opening of the Washington County Railroad. Travelers could come into the station in Princeton and take a ferry to the many camps on Big Lake. This was helpful to bring in sports and led to the large number of sporting camps in this area.

Indian Rock Camps were first called Yates Camps, built/owned by Stephen Yates in the late tannery days. The barn was for boarding horses which brought goods by boat to the landing at Big Lake for the tannery. Prominent people involved in the tannery also fished for salmon during their stay.

The Pines was started in 1883 with the first cabin and the lodge being built in 1894. Everything had to be brought in by ferry. The Shaw's were the first family to operate it.

Chet's Camps was built in the 1930's and named after Chet White, who owned and operated the camps with his wife Pauline for 30 years.

Leen's Lodge began in the 1940s by Cassey and Jack Williams, although Stan Leen and his family made it most famous. The current owner is Charles Driza, who purchased it in 2001.

Grand Lake Lodge has been a sporting camp since 1946. They were started by a fellow by the name of Allen.

Shoreline Camps was built by Roy Bailey in the early 1940's. His son Earl and daughter-in-law took over from him and ran them until 1986.

The Pine Tree Store was built in the 1940's and has continued as a small general store.

The value of the salmon in the area was recognized early on. In 1868, Commissioners of Fisheries in Maine and Massachusetts collected eggs and matured them in a spring in the woods. In 1871, they built a rough log building over the spring. A report from 1877 states 2,159,000 eggs obtained. 470,000 were hatched for Grand Lake. The rest shipped out.

This was the beginning of the hatchery.

The area was known and still is known for its salmon fishing as well as excellent bass fishing, bird hunting and family oriented vacations.

The Town of Princeton and Grand Lake Stream have been linked first by the lakes and then by the roads.

In the late 1700's, Capt. Tomah Lewey, left St. Andrews, New Brunswick due to the influx of Loyalists near the his tribal village. He, his wife and children canoed to a small island near Lewey Lake, that became known as Lewey's Island. In the 1800's he helped tribe members and many others settle in the area. When the island was flooded by a sawmill dam he relocated his family to the current site of the Indian Township Tribal Office. In 1850, Peter Dana Point was established and the Chapel was built the next year.

When the first area steamboat was built in 1853, it was named the Captain Lewey. He also surveyed the stage coach route that is now Route 1. In August of 2008 the portion of road that runs from the Princeton-Indian Township bridge to Topsfield was designated as the Capt. Tomah Lewey Memorial Highway.

Then there was Moses Bonney. He built a cabin in South Princeton in 1815 for him and his wife, Elizabeth Chettis. The next settler was a friend of Moses, Samuel Brown and then Ebenezer and Nancy Rolfe. These settlers worked in lumber camps in the winter and on their farms in the summer.

The Town of Princeton was incorporated in 1832.

1853 The Schodiac Lake Steamboat Corporation built the first steamer, the Captain Lewey. 110 feet long, a large stern-wheel driven by two engines. The steamer first towed booms of logs across Big Lake. The steamer was refurbished in 1900's by St. Croix Paper Company. When the company moved operations from Big Lake, the steamer was sunk in Greenland Cove on Long Lake where the remains can still be seen today.

In 1854 the first railroad train line came to Princeton, called the Lewey Island Railroad. Then in 1869, Lewey's Island and the Calais and Baring Railroad combined and was called the St. Croix and Penobscot Railroad. The last train ran in 1933.

Put Rolfe, first clerk of Princeton, built The Lakehouse in 1854, although it was not turned into a sporting lodge, until purchased by Buck and Lois Tripp in 1946. The Lakeside is now owned/operated by Gary and Jennifer Dubovick.

Put Rolfe owned the only country store and Eliphalet Olmstead was the only blacksmith. Then came in Naaman Horseman, and his stable with horse and buggy for hire. In 1858, a stave mill, and grist mill and in 1865 a wool mill were built. Unfortunately a number of fires in the area burned many of these businesses, some were rebuilt and some were not.

Just as Grand Lake Stream was a haven for rusticators, Princeton became known as well.

The sports loved the areas so much that they would send their families in the summer. These visitors brought the latest in fashion to Princeton. The first business owned by a woman was started by Flora Belmore, who in 1870 started Mrs. Belmore's Fancy Millinery and ran it out of her home. In 1951 Peter and Olga Mardavich purchased it and opened up the Bellmard Motel and Tourist Home. The Bellmard Inn was purchased by Sandra Smith and Ian Clements in 2007.

In the 1890's Princeton was booming with mills, an agricultural fair, a band, a theater, a baseball team.

St. Croix Paper Company opened a mill in Baileyville in 1906. It is currently still operating as the Woodland LLC.

1915, Princeton got phone service. Then came the automobiles and outboard motors and things moved a lot faster and people moved away. Those that stayed worked in the lumber industry or sporting camps as they do today.